What is the Amazon Sales Ranking for Books?

Have you ever suffered from Amazon sales ranking fever? It’s a strange condition that takes over an author’s brain and compels him or her to continually peek at their book’s Amazon sales ranking throughout the day. Each time you look, you pray for the ranking to improve before you check it again in another hour. Some authors even awake in the middle of the night to check their rankings before the sun comes up. Here’s an example of what an Amazon book sales ranking looks like (You will find it under the “Product Details” section on your book’s Amazon page):

I’ll admit that I’ve battled Amazon “sales rank fever” in the past. And, some of my consulting clients struggle with the problem. It can be addictive to see how your books are performing on Amazon, because they sell more books than any other retailer. Besides, it’s fast way to gauge sales without having to call your publisher, pay for an expensive BookScan account, or wait for a royalty check.

However, most people know that an Amazon sales ranking must be taken with a grain of salt. Jeff Bezos guards their secret algorithms like the gold in Fort Knox. No one knows how accurate the rankings really are. In fact, even the staff at Amazon has admitted their system isn’t completely precise. Thus, why even bother?

Amazon sales rankings can provide helpful clues about the performance of a book during a campaign. Plus, the rankings can help compare how similar titles are faring against each other. Since Amazon practically owns the book retail market, it’s easier for authors to judge immediate response to specific marketing activities by checking one website. In addition, the rankings give self-published authors a way to prove that their sales can sell every bit as well as an established writer.

What does the Amazon Sales Ranking Really Mean?

An Amazon sales ranking only gives a ballpark idea about a book’s actual sales. Their system updates rankings every 60 – 90 minutes, so the numbers constantly fluctuate throughout the day. A book could have a good ranking in the morning and a worse ranking that same evening. Therefore, you never get numbers that are solid enough to make big decisions on its own. At best, the rankings can show real-time sales momentum or a lack of consumer interest.

If you want to draw any real conclusions, it’s always best to include actual sales data from more reliable sources, such as Nielsen BookScan. But, is it possible for Amazon rankings to give any reasonable insights? Here’s an example.

I helped a New York Times bestselling author launch a new book. During the pre-order campaign, we found that the Amazon sales rankings provided a decent indication of sales momentum. That’s because my author client offered a series of special gifts to encourage pre-orders. In order for people to receive the pre-order gifts, they had to go to the author’s website, provide their retailer receipt number, and tell how many copies they purchased. I captured this customer information each day in a database, and then compared the data to the book’s daily Amazon ranking over time.

Before I discuss the results, let me emphasize that everything you see is purely an estimate. There are no hard and fast rules. Do NOT quote these numbers or assume they will directly match your specific book sales. I simply conducted this exercise to prove a series of other important points, which I’ll mention in a minute. Here’s how the Amazon sales rankings translated into customer purchases according to one book that I tracked:

Note: Numbers are an estimate ONLY and not to be used for gauging actual sales..

Why would I show you this information when it’s just a guess that cannot be trusted? For several important reasons:

Therefore, there is NO reason to brag or get depressed about your Amazon sales ranking. The only authors selling a ton of books on Amazon are those with rankings less than #500 who maintain that level for several months. Those are the icons of the industry with major publishers and massive resources behind their book campaigns.

As another example, I consulted on a backlist book that consistently maintained an Amazon sales ranking of less than 500, which is amazingly rare. Yet, it typically sold only 2,500 – 3,500 copies per week. Sure, that’s way above average, but no one is retiring to a private island on those numbers.

2. If you tell people your book is a #1 bestseller on Amazon, it means absolutely nothing.
I’m fed up with how many misguided authors tell people their book is a #1 Amazon bestseller. Any author who makes such a claim smacks of desperation and a lack of ethics. Here’s why: 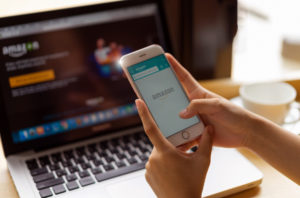 Any author can mount a marketing campaign that temporarily spikes a book to #1 in an obscure Amazon category for a brief period of time – maybe one day or two. But, that spike is a fleeting moment, which quickly drops off. If a book gets to #1, you could use my chart above and guess that it sold 100, 250, or even 1,000 copies in one day. That’s good, but it’s still not that many copies sold.

Then, what about the next day when the ranking quickly falls off to 500, 2,500, or 5,000? Sales are back to modest amounts of 50 – 100 per day. Therefore, a brief spike to #1 on Amazon doesn’t mean a lot of books were actually sold. In order to hit the legitimate bestseller lists, such as the New York Times, USA Today, Wall Street Journal, or Publishers Weekly, you’ve got to sell around 5,000 copies or more in a week. (Amazon now has their own official bestseller list called Amazon Charts.)

The Myth of Being an Amazon Bestseller

What if I told you that I was the fastest runner in my neighborhood? Would you know if it’s true? Would you even care? No, because it’s a silly claim that sounds ridiculous.

Likewise, authors who claim to hit #1 on Amazon look foolish, because they take an unverified number and make a big deal out of it. However, the public doesn’t look very smart when no one challenges these authors’ preposterous claims.

Authors who claim to be #1 on Amazon don’t tell you it was actually a small abstract category, such as “Women’s issues,” “Advertising books,” or even “Children’s pig books” (yes, that category actually exists). These arbitrary categories are a distant cousin of the main Amazon Top 100 sales ranking list. And, if you know anything about distant cousins in real life, they’re usually out of touch with the main family.

I’m shocked by how many authors and publishers will go out of their way to display “#1 Amazon bestseller” on their websites, press releases, Facebook pages, and even marketing copy. Are we so desperate for accolades that we resort to making up random awards with no basis in fact or actual sales data?!

Just because a book is temporarily #1 in an arbitrary category on Amazon means nothing. For instance, at the time of writing this article, below are rankings for three book categories that I randomly selected:

As you can see, being #1 in a specific category is a far cry from being #1 on Amazon overall. Not many books are actually being sold. Plus, the rankings fluctuate by the hour. So, claiming to be top dog in a random Amazon category is like claiming to be the biggest Chihuahua at a dog park. It doesn’t make sense.

If you want to be considered a genuine bestseller, earn it through legitimate marketing efforts that create tangible results. For example:

For instance, what if I touted myself as the “#1 Book Marketing Consultant in the World”? Who sets the standard and how would anyone know the difference? I could display that title on my website, but you’d probably think I was a phony and question my ethics.

Marketing a book requires hard work that can already make an author seem a little crazy. Why make things worse by creating silly claims about a book’s Amazon ranking? Being an author with a book on Amazon is a rare achievement by itself. We get the unique opportunity to educate, inspire, and entertain the world. There’s no need to work ourselves into a frenzy and manufacture false accolades.

Now you know what the Amazon sales ranking actually means. Take my advice and use it as a prescription to avoid getting Amazon fever forever.

Wish you could sell more books on Amazon? Learn the secrets in my online video course, Mastering Amazon for Authors. It’s already helped over 500 authors discover how to maximize book sales at the world’s largest retailer.

Want 3 free e-books that explain how to jumpstart your book sales? Click here to get my free gift for authors.