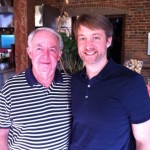 Marketing and sales is in my blood. That’s because I come from a distinguished line of salesmen. My grandfather was in sales. My father was in sales. In college, I tried to buck the trend by majoring in landscape architecture. But, my inability to recall the Latin names of deciduous trees stymied that plan and put me back on the family path.

Yesterday, I had the pleasure of spending Father’s Day with my dad who’s now retired. However, he still uses his sales and marketing skills as a volunteer to raise money for a major non-profit organization. He’s just as successful today as he was in his working days. One reason for his success is based on a story he told me.

When I was little, my father was hired for a new sales job and went to the company’s corporate office for two weeks of initial training. During the training period, he inadvertently received a memo written by one of the managers who stated that my dad was unqualified for the job and would never help the company. In that situation, my father faced two decisions. He could let this rejection ruin his motivation and assume he’d lose his job. Or, he could use the negative memo as fuel for motivation. He chose to let it propel his desire to show the skills he offered. Against the manager’s prediction, my father went on to secure his job, receive several promotions, and enjoy a successful 20-year career with the company.

There’s a lesson here for all of us involved in marketing. Rejection comes with the territory. For example, if you’re an author, you’ve probably received your share of rejection letters from publishers. If you manage a non-profit, you’ve probably been dissed numerous times by people who wouldn’t support your cause with their time or money. If you’re a business owner, you’ve had your share of rejection from potential investors or prospective customers who never panned out.

One of the unseen traits of a good marketer is the ability to use rejection as motivation to reach your goal, rather than deter you. This is why I consistently harp on the idea that effective marketing must rest on the belief that your product, book, or service can truly help other people. When you believe that you’ve got tangible value to offer the world, then rejection just becomes a temporary speed bump on the road to success.

People will snub your ideas, ignore your requests, and recommend someone else for the job you want. Rejection is inevitable. The question isn’t whether it will happen to you. The question is how will you respond? I’m thankful for a father who persevered through rejection. If father knows best, we could all learn this valuable lesson from my dad.