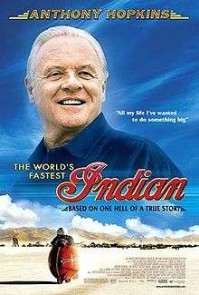 There’s an entertaining movie featuring Anthony Hopkins called “The World’s Fastest Indian.” The film is a biographical account of Burt Munro, a old man from New Zealand who set a land speed record on Indian Scout motorcycle. He competed and broke the 200mph barrier at the Bonneville Salt Flats in Utah in the 1950s and 1960s.

Burt’s story depicts a man who persistently followed his dream. But, the end of the movie displays an interesting scene. After Burt has broken the land speed record and achieved his dream, the screen fades to black and says, “…And Burt never stopped trying to go faster and faster…” He continued returning to Bonneville to attempt more records.

How does Burt’s story apply to you and me? All too often, we tend to let up once we reach a goal or an important milestone. For example, an author finally gets a publishing contract or hits the bestseller list. Afterwards, they stop working on their craft and their writing gets stale. (We’ve all read books where you can tell the author “phoned it in.”) A non-profit reaches their goal for donation pledges, but then the organization stops marketing and loses touch with the community. A business reaches its sales goals, but then stops innovating or creating new products.

Beware of the success trap. When you reach a big goal that expends a lot of energy, there can be a tendency to let up and take your foot off the pedal. Celebrating a victory and recharging yourself is crucial. But, if you stop trying to grow, you can become stale. Just because you become a bestselling author doesn’t mean there’s no more to learn about writing. The beauty of art and business is that there is always more to explore. You can always become a better writer, a better marketer, or a better organization.

People used to ask Burt Munro why he kept trying to go faster on his old, beat-up motorcycle. His response, “I guess the reward is in the doing of it.”

Only a Few Spaces Remaining:
I’ve been invited to conduct an exclusive Book Marketing Boot Camp at the Write-to-Publish Conference in Chicago, IL on June 5 – 8, 2013. For only $149, you’ll get 8 hours of intensive instruction with me and a small group of fellow authors. I’ll teach in the morning, and conduct exercises in the afternoon. By the time you leave, you’ll already have finished important steps towards increasing your book sales. At $149, this is the lowest price I’ve ever provided for such an advanced level of teaching. Register today