I’m a 5-foot, 10-inch white man who can barely jump. LeBron James is 6-foot, 8-inch basketball superstar who jumps so high people wonder if he’s human. So, we’re polar opposites on the basketball court. But, after watching LeBron win his first championship last week, I felt a strange connection between us. He just secured his first NBA title – a feat that had eluded and frustrated him for several years. I just published my first business book, Sell Your Book Like Wildfire, a feat that eluded and frustrated me for several years. During LeBron’s post-game press conference, he talked openly about the difficult road he had walked to achieve his goal. Some of his comments offer timely lessons for authors:

“When I lost year, I was humbled and it took me to rock bottom.”
In 2011, LeBron and his team suffered a humiliating loss in the NBA finals, which brought a load of doubt and criticism into his life. After eight seasons of basketball, he began to wonder if he’d ever win a title. But, he didn’t let his superstar status go to his head by retaliating and accusing other people for the defeat. Instead, he humbly took the blame upon himself. Accepting this burden positioned LeBron to fight back and win a championship this year.

As an author, it’s humiliating when you can’t get someone to publish your book. Over the past three years, my proposal for Sell Your Book Like Wildfire was rejected by 15 publishers and 4 literary agents. Talk about humbling. It’s tough to keep writing when the setbacks feel endless. But, instead of blaming other people, I had to accept the rejection with humility and use it as fuel to propel me forward.

“I looked myself in the mirror and realized I needed to get better
both on and off the court.”
LeBron’s devastating defeat in 2011 forced him to do some soul-searching. His conclusion? I’m part of the problem. Even though he was nicknamed “The Chosen One” as a rookie, nobody was going to hand him a championship. He had to earn it, which meant he had to get better as a person and as an athlete. LeBron made changes in his family life and asked older basketball players to help improve his game. Those changes made him feel more complete and ready to bounce back from last season with a stronger mindset.

When I first wrote my book proposal, I thought agents and publishers would beat down my door with offers. Instead, I got a lot of rejection. Nobody handed me anything. So, I had to stop and ask myself if I was the problem. Was I getting in my own way? Grudgingly, I re-examined my manuscript and realized that my writing was too flat. I had good content, but my big idea wasn’t communicated in a captivating manner. So, I took steps to make the necessary changes to get my book proposal to the next level.

“Winning this championship is a testament to hard work paying off.” 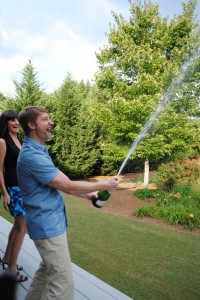 Success is sweeter when you earn it. After a year of renewed effort, LeBron celebrated his first championship with gusto. He danced with his teammates as champagne flowed freely in the locker room. My favorite part was watching the look of unbridled joy on his face as he received the winner’s trophy. By finally accomplishing his goal through hard work, the sense of satisfaction made all his pain and effort feel worthwhile. Now, he’s emboldened with a deeper sense of confidence to go win another NBA title.

Likewise, I can understand how LeBron feels. Putting in the hard work to finally get my book published (with Writer’s Digest) has given me a deep sense of satisfaction and confidence. I can’t say that I partied like LeBron…but some champagne did flow freely. The best part is seeing three years of hard work come together to create a resource that will help thousands of authors achieve their goal to sell books like wildfire.

I may never dunk like LeBron or win an NBA championship. But, we both share the fulfillment of seeing a difficult dream through to completion. Maybe he’ll decide to write a book someday. If so, I’ve got just the answer.

Enough about me: Have you overcome a long period of rejection as an author, business owner, or non-profit director to reach a long-term goal?  Share your story (concisely) by posting a comment below. I’ll pick my favorite story this Thursday, and the winner gets a free gift from my website store.